The U.S. economy is still facing major headwinds, with another 853,000 Americans filing for unemployment benefits last week, the highest total since mid-September. Corporate earnings are recovering faster than expected but will still likely decline nearly 10-15% in 2020. Yet, despite this difficult and uncertain backdrop, the market for companies coming public is better than any year since the late 1990’s.

The Initial Public Offering (IPO) market is having a banner year, with nearly $75 Billion in proceeds raised, the highest since 2014. This is culminated by the largest IPO of the year, Airbnb, set to open with an implied valuation nearly 5x what their private market valuation was at the depths of the March market meltdown.

Doordash, soared nearly 80% during its IPO on Wednesday, closing with a market capitalization of more than $70 Billion. For context, that valuation is greater than the combined market caps of Chipotle (CMG: $37B), Dominos (DPZ: $15B), Dunkin Brands (DNKN: $9B), and Wendy’s ($5B). At today’s opening indication, Airbnb’s valuation of more than $100 billion is worth more than both Marriott and Hilton combined. Tech platforms are getting huge premiums to the asset-heavy incumbents.

While the traditional IPO market is relatively strong on its own, the difference this year is the emergence of Special Purpose Acquisition Companies (SPACs). SPACs are entities created solely to acquire or merge with a private business which they then can take public. Think of it like a writing a blank check, with some benefits to the private companies of avoiding some of the cumbersome requirements of the traditional IPO process.

The SPAC structure is not new to this year, but the amount of money raised has dwarfed anything we have seen before. In fact, before this week’s major IPOs of Doordash & Airbnb, SPACs had raised more capital than the traditional IPO market this year, and nearly 7x last year’s total. 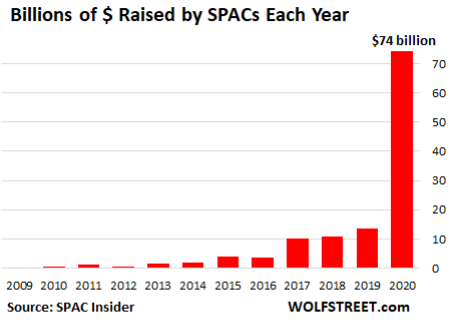 Many of these SPACs, which often come from emerging industries like electronic vehicles, have attracted premium multiples from investors, which is another reason why they have become even more popular. If you combine the amount of money raised from SPACs and IPOs, it is approaching nearly $150 billion, which is a number we have not seen since the internet bubble in the late 1990s.

The willingness for companies to come public is highly influenced by the success of recent offerings, and IPOs have had a very strong year despite very little activity in the first six months of the year. The Renaissance Capital IPO ETF (ticker: IPO), is up over 110% YTD, vs. the roughly 14% gain for the S&P 500. 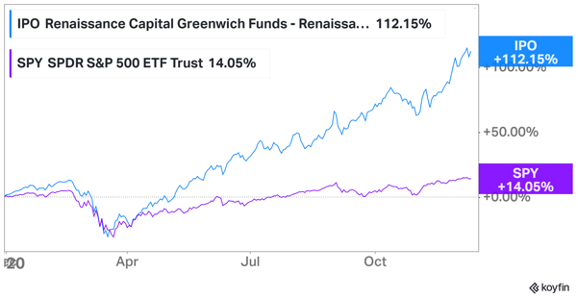 That only tells half the story as well. On the credit side, 2020 has seen record corporate bond issuance from companies as well. By August, we had already surpassed the previous all-time high of 1.2 trillion in investment-grade corporate bond issuance. As of the end of November, the total for 2020 stood at over 1.65 trillion1 with still another month of capital raising to go.

Despite such uncertain times, this is arguably the best year ever for companies to raise capital. Given the absence of liquidity in March and April, and all the uncertainty that remains for the economy, this is a remarkable turnaround. Perhaps this is another reason why the market appears so rosy in its expectations over the coming years as company balance sheets benefit from cheap sources of capital from both the equity and credit markets.