For stocks, it is all about expectations. Not necessarily if the news is good or bad but was it better or worse than what we thought. So far, this earnings season has shown progress in Corporate America above what Wall Street was expecting. 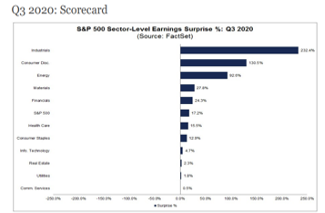 The biggest upside surprises have come from the cyclical sectors of the market (industrials, consumer discretionary, energy) which has led to relative strength in cyclical (and value) stocks in recent weeks.

For all of 2020, S&P 500 revenue is now projected to be down 2.7% while earnings are expected to be down 17%. Next year, the consensus estimate calls for revenue growth of around 8% and earnings growth of nearly 25%. That would mean earnings would hit a new all-time high less than 18 months from the downturn, which is faster than what we would have expected.

A Trend of Positive Market Momentum

A lot can change over the next year, and Wall Street tends to start their projections high, but this is what is underpinning the positive market momentum. It may be confusing for investors to compare the stock market near all-time highs to an economy still well under water, but keep in mind that the market is forward-looking, and it appears to be extrapolating this downturn as transitory vs. long-term in nature.

And just as we have exceeded estimates on the upside, there is always the risk that things do not play out as rosy as these projections suggest. For now, the results have been on the positive side of expectations.

With election night a mere 8 days away, we would expect the fiscal stimulus package to be left in limbo for the near-term and that markets could get a bit choppier over the next week. All things considered; things have been relatively calm in light of all the uncertainty.