After gaining over 75% from its March 23 low, the tech-led Nasdaq Composite finally corrected to start September, its worst two-week performance since the first quarter selloff. In just three trading days, the index shed 10%, which was the fastest such correction from an all-time high on record1.

What to Make of Big Tech Growth Trends

It is no secret that shares in technology companies have done most of the heavy lifting for the market’s resurgence. As investors digest the potential short and long-term ramifications of various COVID-19-induced trends, such as working from home, companies that appear well positioned have seen their shares bid up most feverishly.

There are no doubt shifts taking place in the economy, but we would exercise caution when growth or trends get too far extrapolated into the future.

Some of the sentiment may be due to the recent wins from the newest investors. As we have noted before, the recent surge in new account openings and the advent of commission-free trading has caused retail trading to have a resurgence this year. In fact, retail trading recently accounted for 44% of total trading activity, says Jefferies strategist Steven DeSanctis, up from 25% in 20091.

Not only is retail trading up, but activity has become more levered with a surge in options trading. Options allow for a much smaller capital commitment for a commensurate exposure in underlying shares. As Barron’s highlighted this weekend, options volume in single-stock equities averaged a record 18.4 million contracts a day in August, up about 80% from the average monthly volume during 20192.

Not only are options volumes up, but a higher proportion of options trades are now for single contracts, an indication of smaller investors speculating in the market. 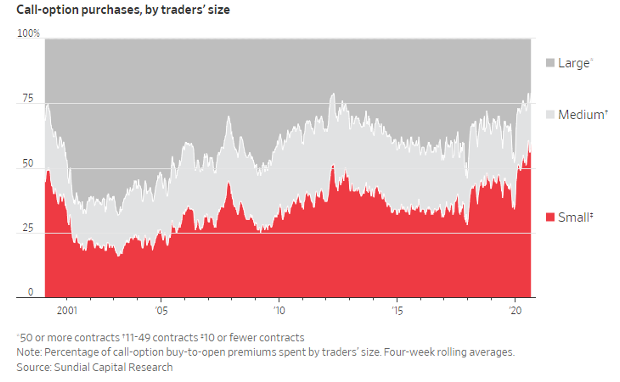 Jason Zweig did an excellent job discussing the risks of options trading for the average investor in Friday’s Wall Street Journal (see source below). In summary, although options can magnify gains, they can also quickly magnify losses. The randomness of the market and individual stock returns in the short-term make options a very risky bet for the average investor. More importantly, you do not need the leverage of options to create wealth in the stock market.

Jeff Bezos, currently the richest man in the world, once asked Warren Buffett (at that time the richest) how he accumulated so much wealth with such a simple investment thesis. After all, why wouldn’t everyone just copy him?

Warren Buffett responded by saying, “Because nobody wants to get rich slow.”