Two of the highest profile stocks, Apple and Tesla, are undergoing stock splits today. Most investors should be aware by now that a stock split does not make the total value of your share ownership higher post-split. After all, if you cut a large pizza into either 8 or 16 slices, it is still a large pizza.

Even so, that has not stopped both stocks from rallying after their recent announcements, a trend reminiscent of the stock split frenzy of the late 1990’s.

Even if fundamentally there is no change to their business values, sentiment can move stock prices in the short run. Apple and Tesla were both trading with very high levels of positive sentiment pre-announcement, so the splits only added to the level of speculative behavior.

The recent surge in retail trading is probably driving some of this behavior, given that there has been a record number of new account openings at the major online brokers since March.

Companies usually split their stocks as a way of making shares more affordable for smaller investors. The exercise was much more common in the late 1990’s when companies were rewarded by the market for such actions. Over the past two decades, splits have become much less common. 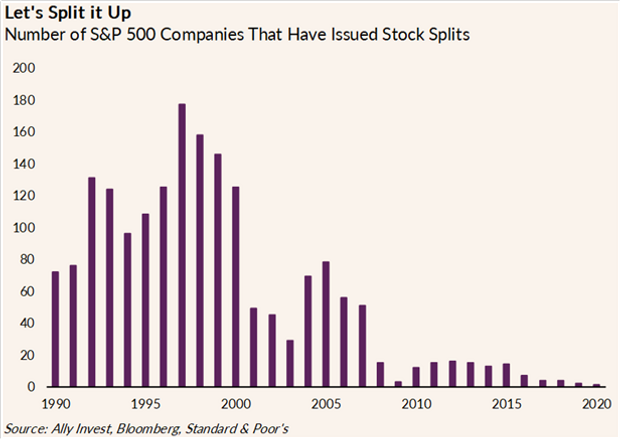 There are several retail brokerages that offer fractional shares, so stock splits should theoretically be less necessary for the smaller investor now than in the past (Tesla and Apple were #1 and #3, respectively, in terms of stock popularity for fractional share trading on the free trading site, Robinhood1).

Still, if the market starts rewarding companies for splitting their stock, you will undoubtedly see a pickup in the number of companies who elect to do so, even if small investors now have access to fractional shares with no trading costs.

Since Apple is a member of the 30-member Dow Jones Industrial Average, which weights its constituents based on each company’s stock price, its weighting in the index will also be cut by 75% today.

This methodology does seem archaic as compared to the S&P 500’s process of weighting by market capitalization (# of shares x stock price), which removes any effects from stock splits.

The Apple stock split prompted S&P Dow Jones Indices, the publisher of the Dow Jones Industrial Average, to swap out three of the constituents effective today. Salesforce.com, Honeywell & Amgen are in. Exxon Mobil, Raytheon & Pfizer are out. Given the high stock prices for both Salesforce.com and Amgen, those companies will start off at the #3 and #4 weights, respectively, in the new Dow weightings.

The S&P 500 is outperforming the Dow by roughly 8% this year, the largest gap in relative performance since 19322. If you remove Apple’s 1,400+ point contribution to the Dow’s returns, the gap would be even higher. That performance gap is mostly from the divergence in value vs. growth, and the underweight of technology in the Dow vs. the S&P 500.

Salesforce.com was added so that the sector differences would not become even wider. Even with the addition, the Dow remains value-heavy compared to the S&P 500’s growth tilt.

The peculiar methodology for price-weighting the Dow, as compared to the market-cap weighted S&P 500, is why most index funds are linked to the S&P 500. According to Morningstar, there are only 31.5 billion in index funds tied to the Dow but over $11 trillion tied to the S&P 5002. So, the Dow may be the index you hear most mentioned on the news, but the S&P 500 is what really matters in terms of assets.

The opinions voiced in this material are for general information only and are not intended to provide specific advice or recommendations for any individual.  To determine which Investment(s) may be appropriate for you, consult your financial advisor prior to investing.  Information is based on sources believed to be reliable, however, their accuracy or completeness cannot be guaranteed. Statements of forecast and trends are for informational purposes, and are not guaranteed to occur in the future.
All indices are unmanaged and may not be invested into directly. Advisory services offered through Feltz WealthPLAN, DBA of WealthPLAN Partners.  Securities offered through Securities America, Inc., Member FINRA/SIPC. Feltz WealthPLAN and Securities America are separate entities.