The S&P 500 has nearly completed a full recovery from the first quarter selloff, briefly jumping above its record closing level in yesterday’s trading session, just shy of the intra-day all-time high of 3,393.

According to Bloomberg, the previous 12 cycles in which stocks recovered from a drop of at least 20% took an average of four years to recover. Although the pace of the selloff often mirrors the pace of the recovery, few would have predicted a full recovery less than 5 months from the market’s 35% plunge in late March. 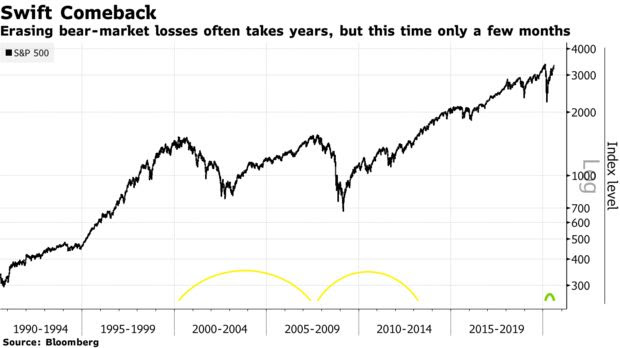 As we have noted in prior commentaries, the heavy lifting has been done by a handful of companies. The average stock in the S&P 500 index is still down 6% since mid-February and only a third of stocks are in the green since that time. Amazon, Apple, Facebook, Alphabet & Microsoft have now exceeded their pre-selloff peaks by an average of 23%.

The same impact held true at the bottom of the market fallout. Although the S&P 500 had declined almost 35% in late March, the average constituent fell 44% during that time. Again, the index was helped by the relative performance of the major tech titans.

What's Affected by the Cyclical Economy

The recent success of growth stocks has come at the expense of value, but more recently value names have shown hints of strength. Given that these companies are more cyclically affected by the economy, it is a positive sign that sectors like transports have started to perform relatively strong compared to the broader market.

Over the past one & three months, the Transports ETF (IYT) has outperformed the S&P 500 ETF (SPY) by 11% and 19%, respectively, buoyed by gains from major constituents FedEx, UPS & Boeing.

Typically, value stocks perform best coming out of the recession. We have not seen that fully take place yet, but the extraordinary Fed stimulus support and the subsequent premiums investors are willing to pay growth in a world of zero interest rate policy, continue to make this cycle unique in a historical context.  Even so, a catch-up for value vs. growth would be a positive sign for investors, even if it comes at the expense of the market darlings.