The past few weeks have been filled with stories of small investors (David) vs. hedge funds (Goliath), where an increasing amount small investors have come together to not only push up the stock prices of seemingly failing brick-and-mortar stores, but often pushing a handful of hedge funds to the edge of extinction. Very few stories have been able to steal Covid-19’s spotlight, but this has had a little something for everybody.

To best illustrate what is happening, I will use GameStop as an example, but keep in mind that a similar story can be said of AMC, Blackberry, Bed Bath & Beyond, and many failing brick-and-mortar stores turned meme stocks.

An Investor's Tale of Mythical Proportions

GameStop (GME) is a company with ~5,000 stores - mostly in malls – that sells video games and consumer electronics. In GME’s prime, it was THE store for gamers and could often be seen with lines that rivaled Chick-fil-a at lunch time.

However, the fundamental way in which people access video games has changed, with consumers now easily able to download games straight from their console, and consoles easily purchased from online or other non-mall oriented retailers. Suffice it to say, GME failed to stay ahead of changing trends and has suffered the consequences, finishing 2019 with negative earnings of ~$795mm and rumors of bankruptcy.

This trend was accelerated in 2020 with the onset of the Pandemic, bringing the stock down to as low as $2.80, after being in the $30’s just a few years ago.

So what took place that led to this crazy chart?

Well, for a variety of reasons, an optimistic thesis for the future of GME formed, with notable influential figures like investor Michael Burry (whom you may recognize from The Big Short) and Chewy co-founder Ryan Cohen publicizing their positive views and sizeable stakes in the company.

This, among other factors, lifted GME’s share price to ~$19 by the end of the year, giving GME a valuation of roughly $1.5B.

This led investors, largely hedge funds, to bet against the stock since they viewed GME’s newly high valuation and the ‘inevitable’ demise as incompatible. So how does a market participant bet against a stock, and why is it relevant?

The Plan to Short GameStop Stock

When an investor has negative views about a company and wants to profit off of a falling stock price, they can short the stock. As an example, if a hedge fund wanted to short 10 shares of GME at a price of $10, it would borrow those shares from a broker and sell them in to the market for $100 (shares x price).

The Hedge Fund now has $100 and an IOU of 10 GME shares to the broker at some point in the future, in addition to a small commission the broker receives for their troubles. If the stock price moves to $5, the Hedge Fund can buy back the shares for $50, deliver them to the broker, and pocket the $50 difference, minus the small fee.

Put simply, the investor is really just reversing the normal sequence of actions – selling the stock first and then buying back later, hopefully at a lower price.

There is an online forum called r/Wallstreetbets, which is hosted on Reddit, where participants gather to discuss stock and option trading. The forum is best known for its discussions on high-risk stock transactions, and participants will often try to build momentum in a stock by rallying others to jump in.

In this case, users gave note to the fact that GME had ~140% of its public float being sold short – for simplicity, this means that so much of GME stock was being sold short that some shares were being re-lent out and shorted a second time.

The thought was that the company’s shares were being held down by short sellers to a degree that made the stock significantly undervalued, and by congregating together to buy the shares and push the price-up, they could ultimately trigger a short squeeze – making a big profit and sticking it to the Hedge Funds.

Short squeezes occur when a shorted stock jumps a lot higher in price, making the investor who is short feel ‘squeezed’ as their borrowing costs go up and they have to post more collateral to cover the risk to the lender.

Often, this squeeze forces the short investor to buy the stock to cover their losses, eventually creating a nasty feedback loop where a short seller gives up and buys the stock, pushing the stock higher, causing others to get squeezed and do the same.

It’s important to keep in mind that unlike buying a stock where the most you can lose is the price you paid, shorting a stock theoretically has infinite downside.

But wait, there’s more! A similar feedback loop occurred with a lot of participants buying into GME through call options, which for brevity sake is essentially a gamble that the stock will go up to at least a certain amount within a given time period.

The ‘market maker’ who is selling those options has to hedge their risk as the price goes up, causing them to buy GME stock, which pushes the price higher, creating another vicious cycle that springs the price upwards. 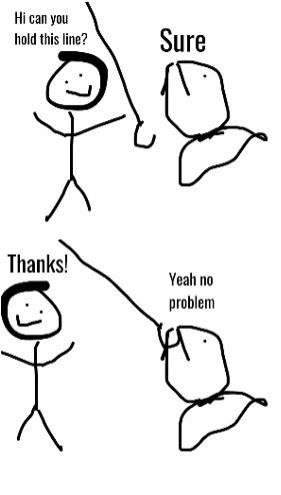 Who Gets Caught by the Hook? Not Just the Hedge Funds

Perhaps early on there were fundamental reasons that people were buying in, but once the momentum kicked in, fundamentals were thrown out the window.

Forum members frequently posted mantras such as, “hold the line” and other phrases aimed at getting people not to sell. The problem with this is that stock prices don’t generally trade at euphoric valuations forever, and somebody has to be left holding the stock when the music stops, the trend reverses and reality sets in.

Unfortunately, this is exactly what has happened, as the stock has dropped from its high of $347 ($500 intraday), all the way down to $49.34 at the time of this writing.

In conclusion, we don’t hold the belief that speculatively trading stocks is necessarily bad – after all, potentially lucrative entertainment and a feeling of togetherness isn’t such a bad thing in a Pandemic - I just believe that the money used on these types of things should be money you are fully willing to lose.

As prudent stewards of your hard earned capital, we prioritize having a sensible and repeatable process, with a long-term time horizon, that way any short-term madness like the past few weeks is purely for your entertainment – and not a detraction from achieving your financial goals.