Stocks surged last week with the major jump coming on Friday after a much better than expected jobs report. 2.5 million jobs were added in May against a forecast that called for 8 million jobs to be lost.

The unemployment rate unexpectedly fell to 13.3%, down from 14.7% in April, but more importantly far better than the 20% predicted by economists. The numbers were partially impacted by employer requirements for PPP loans, so it will be important to monitor how much of this re-hiring recovers outside of these temporary incentives.

For the week, the Dow Jones Industrial Average jumped 6.8% while the S&P 500 gained 4.9%. Over the past couple weeks, we have seen a surge in cyclical stocks as optimism for the economic recovery has improved, which has allowed some of the “left behind” stocks to catch up to the tech leaders.

Since the S&P 500 bottomed on March 23rd at 2,191, the index is up over 47% to close at 3,232 yesterday, less than 5% from all-time highs. Stocks most impacted by the economic shutdown have seen their shares surge even more. In just a matter of weeks, the stock market went from a feeling of economic depression to one in which many now have a fear of missing out.

Likely due to the absence of sports gambling and excess idle time at home, along with the removal of trading commissions at most major brokers, trading from retail investors has surged since early March. In the first quarter, trades at TD Ameritrade were up 144% year-over-year, while E-Trade and Schwab saw jumps of 129% and 98%, respectively. 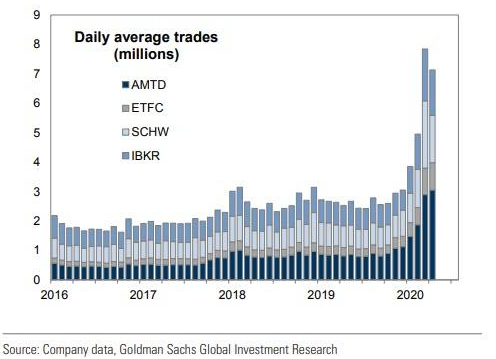 Robinhood, which is a free trading service popular with millennial investors and sports gamblers, has seen a surge in new accounts despite several platform issues during the most active trading sessions in March. 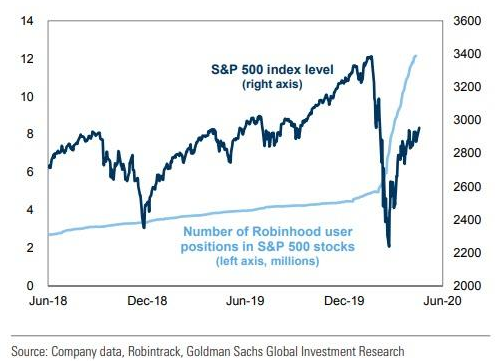 The irony is that the so-called retail “herd” appeared to have bought the market dip, whereas many of the major institutional managers waited for a re-test of the lows and are now “windowdressing” by chasing the market into the end of the quarter so it appears they did not miss out on the rally.

Some of the most popular stocks on sites like Robinhood have been airlines and casino stocks which have seen their shares more than double or triple in some cases from March lows.

It is apparent that many of these traders are new to the market, and an early winning streak can give rise to more speculative behavior.

In recent days, we have even seen stocks in companies that have recently declared bankruptcy surge as retail traders chase price momentum for the most beaten down names. For example, Hertz Global (HTZ) declared bankruptcy on May 24th, but saw its share price surge from under $1 last week to close above $5 yesterday, despite no real expectations of value in the common equity after its restructuring.

Envy and overconfidence bias are both very powerful psychological tendencies when it comes to investing. Some of the action we have seen in recent weeks appears to be more speculative than fundamental, partly related to how much liquidity is sloshing around the system, but also because of how fast the market has recovered and the fear from many investors, many of them new, on missing out on the rally.

We are just as excited to see the economy and market recovery from the March lows, but we think an additional level of prudence is necessary considering these recent trends.

The opinions voiced in this material are for general information only and are not intended to provide specific advice or recommendations for any individual.  To determine which Investment(s) may be appropriate for you, consult your financial advisor prior to investing.  Information is based on sources believed to be reliable, however, their accuracy or completeness cannot be guaranteed. Statements of forecast and trends are for informational purposes, and are not guaranteed to occur in the future.